A. Brown-Olmstead Associates (ABOA) was founded June 1, 1972, making the agency one of the longest serving full-service public relations firms not only in metro Atlanta but also in the Southeast. Based in Atlanta, this boutique firm has worked in most industry segments and has delivered a wide range of public relations and marketing services including: civic communications; coordination of special events; development of marketing plans; fundraising; investor relations; media relations; network marketing; public and government affairs; website navigation and content, and social media. The firm has executed national and international projects, though its major focus has been Georgia.

ABOA has won more than 70 awards for programs executed for our clients. In our industry these awards, such as the most prestigious Silver Anvil awarded by the Public Relations Society of America, are based on the results achieved for the clients as identified as goals during the planning phase. Many of our awards were for major international programs such as the Goodwill Games and the International Ballet Competition.

Throughout its history, the agency has become known for its generous service to community and civic participation. This has allowed the firm to develop an extensive network of contacts in business, government, civic, social, and consumer groups and individuals.

Please review our extensive list of clients elsewhere on this site.

Today ABOA has a staff of four, led by its founder, president, and CEO Amanda Brown-Olmstead, a member of the PRSA Georgia Chapter Hall of Fame.

The Atlanta Business Chronicle has recognized ABOA as the number one agency for handling events in Atlanta.

We have been involved with ULI, architectural firms, the Congress for New Urbanism, and groups such as Central Atlanta Progress to promote walkable cities. We also helped launch the Path Foundation in Atlanta. Extensive work was done with projects in Savannah, the country’s largest historic district known for its walkability. One such project was the re-opening of Ellis Square when working with EDAW.

Sometimes, the events are much larger than a ribbon-cutting or an awards banquet. In 1986, A Brown Olmstead Associates, on behalf of Turner Broadcasting System, handled the first Goodwill Games in Moscow in the former Soviet Union. As part of our initial proposal in winning this business was to use the opening ceremony to honor a child named Samantha Smith. Samantha had reached out to Gorbachev through a letter asking for his help in uniting the children of the Soviet Union with the children of the United States. She and her father died in a plane crash on their way to New York for an appearance on the Today Show. We reached out to Samantha’s mother for permission to honor her during the Opening Ceremony of the Games, which became a story reported around the world.

Throughout our 45-year history, the firm has excelled in creating clever ideas and themes for activities to create exceptional photo opportunities, media attention, VIP participation, and memories.

Because of the many years worked in the Atlanta market, Amanda has become known for networking people and giving back on behalf of her firm and her clients. These types of activities also carried over into Savannah with SCAD, the Savannah Music Festival, the Society of Colonial Wars and the GPB Savannah Advisory Board which she chaired.

Recently the Olmstead home was on tour for the Georgia Trust for Historic Preservationwhere 400 people toured the 1850’s home on a Saturday. 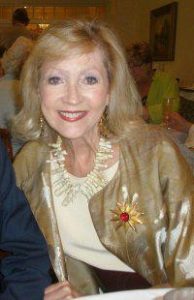 Throughout our 45-year history, the firm has excelled in creating clever ideas and themes for activities to create exceptional photo opportunities, media attention, VIP participation, and memories. A Brown Olmstead Associates has been recognized for its execution of special events to include: ribbon cuttings, ground breaking topping outs, anniversaries, etc.

Our record of providing community involvement includes the following:

• Town Hall Meetings for Georgians for the Brain Train.

• The “Pure Water is No Pipe Dream” campaign for the City of Atlanta.

• The grand opening of 200 Peachtree tied to the 30th Anniversary of Leadership Atlanta.

• Adams outdoor campaign and “You Don’t Know Me from Adam.”

• Development of a book for The J. Mack Robinson College of Business Hall of Fame Program.

• The “New Cyclorama Will Turn you Around” campaign and re-opening event – In thelate 1970s, the agency was retained to re-open Cyclorama in Grant Park during the term of our first African-American Mayor, Maynard Jackson. Many in city government were concerned about how the message about this museum, which focused on the Civil War, would play in Atlanta. ABOA developed a campaign entitled: The New Cyclorama Will “Turn You Around,” which focused on messaging about how the Civil War was necessary to bring our world together in racial harmony. The theme proved so powerful that on the opening day with Mayor Jackson, the city council and other VIPs in attendance, we had approximately 60 media outlets cover this event, carrying the themes of our positioning strategies.

These are but a few concepts that led to extensive community involvement and generous media coverage. We can apply similar concepts and so many others.

Call or Email to Discuss your Business – it's Complimentary